Regular docs came by -nothing new
Occupational therapy - gave Scott of series of exercises to do while seated. I will be doing them with him daily
Dermatologists, twice - his rash is better. they think they know which antibiotic caused it..
Infectious Disease  - concur
Computer guy - just needed to scan the computer
Aaron, the chaplain brought communion. That was really nice
Another sleepy day for Scott, but that is ok, he just has to hang on a little longer and he will start feeling better.
He is not eating, just drinking ensures. I'm thinking he closed the gap between his weight and mine. Yikes. Plus, a gal I met here showed me where the secret ice cream cooler is. Curse her. 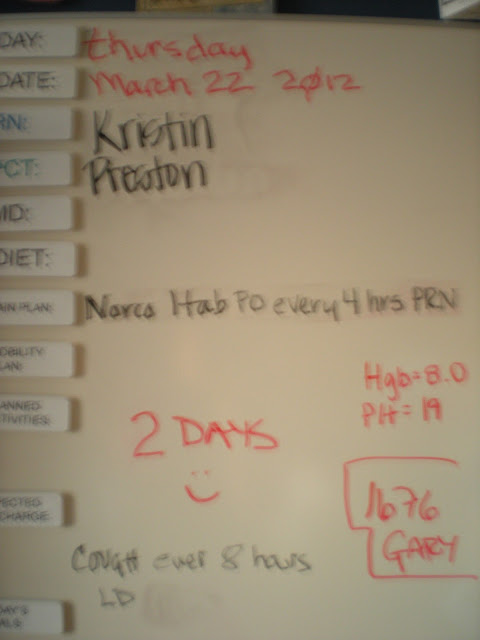 I realize that the doctors said "normally 10 days after the biopsy we start to see numbers coming back up" and that it might be before or after that magic day, but I had to put some kind of carrot out there. The chemo and the long hospital stay has left him so disoriented  - heck I'm a bit off on my days myself'.


We just got back from walking the halls for 5 minutes. he has not done that in 13 days. It took longer to find the right length tubing for the oxygen he has to wear, un hook him from the iv , put a plastic gown on him (new rule), hook up his O2 sensor, get the mask on him that it did the walk. He did fine. It's a start back on the exercise road. Back to no excuses for anyone else, if Scott can go for a 5 minute walk so can you....I think you know who you are :).

Other than that it was another interrupted night's sleep, but he did not get red blood, which is the worst because they hook it up, then take vitals in 15 minutes and every hour after that for 4 hours. So without that added to the mix we got a little more sleep.....here's to another beautiful day. Onward and upward.