Docs came by and all had grins on their faces. They were very happy to see his numbers going up. They said to prepare though, as they expect he will get sicker as his white blood cells start to battle the  pneumonia in his lungs. I don't know when, how bad, how long or what kind of sick, but I am bracing for it. I am pushing him to drink protein drinks every time he opens his eyes. he is annoyed, but I figure I need to load him up if he is going to be real sick, because my guess is he won't want to eat anything during that time.

I on the other hand, just finished off a whole can of pringles. I am pretty much the poster child for stress eating right now.

Scott is sleeping now, but was up for a couple of hours out of the bed in the chair and believe it or not he wanted to play Wii bowling. I set up a chair in front of the TV and he stood behind it, one hand on the chair and played the video game. It was as exhausting as running a marathon for him, but even though he can't say it, he knows how important it is for him to do something. I love him so much for continuing to do the right thing even though it is so difficult.

Prayers for continued rising counts and the pneumonia to clear quickly

GOT tons of cards, I asked Scott if he wanted to open them and he wants to wait until later. Also, got the most wonderful Banner signed by all the PD. The banner along with a fantastic box of magazines and cards made by the children of Open Bible Baptist Church in Manitowoc were HAND delivered by Pastor Harrison last night while we slept. I cried as I read each of the children's cards, especially the real little ones (5yrs) that needed a little help writing there names. The banners is fantastic. I read each of the names to Scott and he nodded his head. I hope that he can enjoy the personal notes when he is able to read himself. Whoever put those Birds and Blooms magazines in that box, God Bless you. I so miss our home and the spring smells. Heck I even miss the weeds. but especially I miss the birds. All I have seen here are crows, sparrows and one cardinal, oh and seagulls and a couple of ducks when I went down to the lake one day.

Thank you so much Pastor Harrison and all of you that donated those magazines and signed the banner. Also, I believe Pastor's wife made the actual banner. Thank you. I'm not crafty, so I am always amazed at what other people can create. 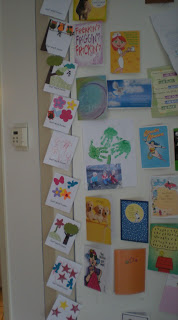 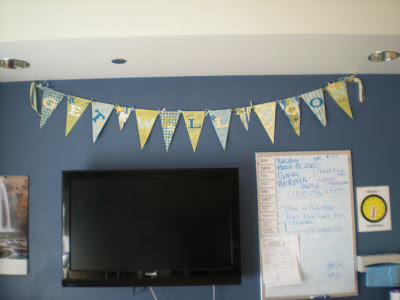 He still feel terrible maybe even a little more so, and it is still a long long way from out of the woods, but the numbers are  climbing!!!!!!

Will post more after I get a shower and coffee and the docs come by.