No side effects yet...we know something will happen, but according to the calendar not until May 6 or so. Everyone is super nice. I reminded a doctor to wash his hands today, in the vapor lock. he said he was going to use the hand sanitizer inside. Blergh. He was young. Best I can hope is he will think twice next time.

Aaron the Chaplain stopped by yesterday. It was really really nice to see him. He is our personal Chaplain. Unfortunately he can't be here for the blessing of the stem cells next Wed. but we think it will be Jeanne, the regular chaplain.

Scott has been tying flies for fishing. This is a foreign concept to our Russian doctor Olga, so she comes in and just has this puzzled look on her face. She did talk to him about fishing though, told him he needs to be covered head to toe. No sun for Scott for quite some time. Bring on the SPF 1000. 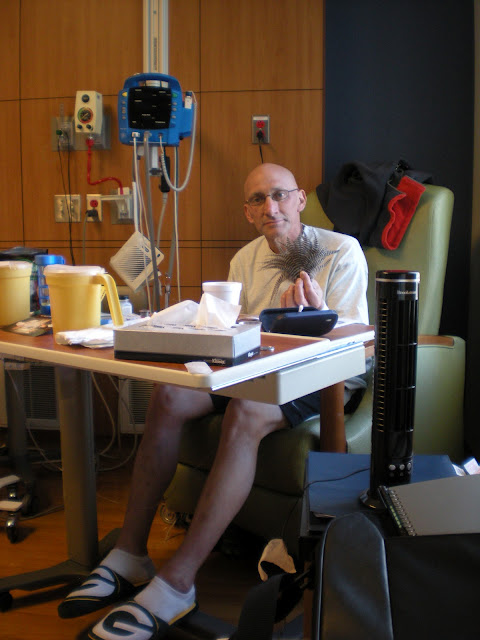 Nurses are eating the cheese we brought. Our friends Darryl and Garnie helped us out with some Bel goi oso cheese from Denmark. It is sooooo good. I figured the nurses get lots of sweets, plus we are from Wisconsin or as the nurse today called us Sconnies. She went to school at UW Madison, as did one of my co-workers  - I think that Sconnie business is just a Madison thing.


Our nurse yesterday turns out is very good friends with one of the gals I bunk with when I go snowmobiling with the Women on Snow. They are both from Monroe Wisconsin. AND she went to UWGB. Small world.

I ran this morning, pretty lame, but had not run at all when I was home. I was too busy eating chicken and pizza with Scott trying to fatten him up...which of course fattened me up too.

Now Scott has a new best friend. Clonapin (sp). They give it to him every 12 hours during chemo and it is helping him sleep at night.

I asked Scott if he was going to post today and he said he forgot...maybe something later.

Thanks for your prayers...

Round two is now in, halfway through getting the chemo.  This is day -5  They have been giving me colazapan because one of the drugs can cause seizures, it makes me very sleepy.  I have been walking and they have a set of four steps to go up and down.  I also play Wii, I will be very bored until I get the ill effects.  I just have to remeber that this should be one month in the hospital and a month in the appartment where I get much more freedom.  Then home, hopefully for good.